Markham has a long and strong history of volunteerism. Each year, the Mayor rewards a nominee over 60 years of age. This senior will have made a unique and outstanding contribution to the Markham Community.

Stay tuned for more information about the next nomination deadline and presentation date.

The City of Markham celebrated new inductees and nominees to the Mayor’s Seniors’ Hall of Fame at the 21st annual awards presentation on October 3 at the Markham Civic Centre. Some of Markham’s most dedicated volunteers were recognized for their years of service, passion and leadership to make Markham a more vibrant place to live.

The 2019 Mayor’s Seniors’ Hall of Fame Award went to retired track and field athlete and pharmacist, Bill Crothers. In 1963, Bill was named the Lou Marsh Trophy winner as Canada’s top athlete. He also represented Canada in the 1964 Olympics, the 1962 and 1966 British Commonwealth Games, and the 1967 Pan Am Games.

In addition to his participation on several boards within the community including Flato Markham Theatre, Markham Stouffville Hospital Foundation, Friends of the Markham Museum, and more, Bill is well-recognized for his work in the community and has been honoured by having Bill Crothers Secondary School named after him in 2008.

Paul is a business owner and philanthropist who has been a resident of Markham for 45 years. He formed Sayal Charitable Foundation 25 years ago as a philanthropic arm of his business, Sayal Electronics. To this day, the foundation supports various charities across the community. Paul also volunteers for the Markham Stouffville Hospital, the Canadian Mental Health Association and the Markham Food Bank.

Eric has been an active volunteer in the community since 2003. He continues to serve on the Board of Governors at Markham Stouffville Hospital and since 2011, he has been a co-chair of the York Regional Police Advisory Committee and Police Appreciation Committee.

Certificates of Appreciation were awarded to Pam Birrell, Branch Duncan, Pat Howell and Jim Sandiford for their work within the community.

Flowers were also presented to 99 year-old Branch Duncan along with a spontaneous rendition of “Happy Birthday” sung by everyone at the event. Branch will celebrate her 100th birthday on December 6, 2019.

The ceremony followed a flag raising by the Community & Home Assistance to Seniors (CHATS) to recognize National Seniors Day on October 1, 2019. Event photos are available at markham.ca/photos. 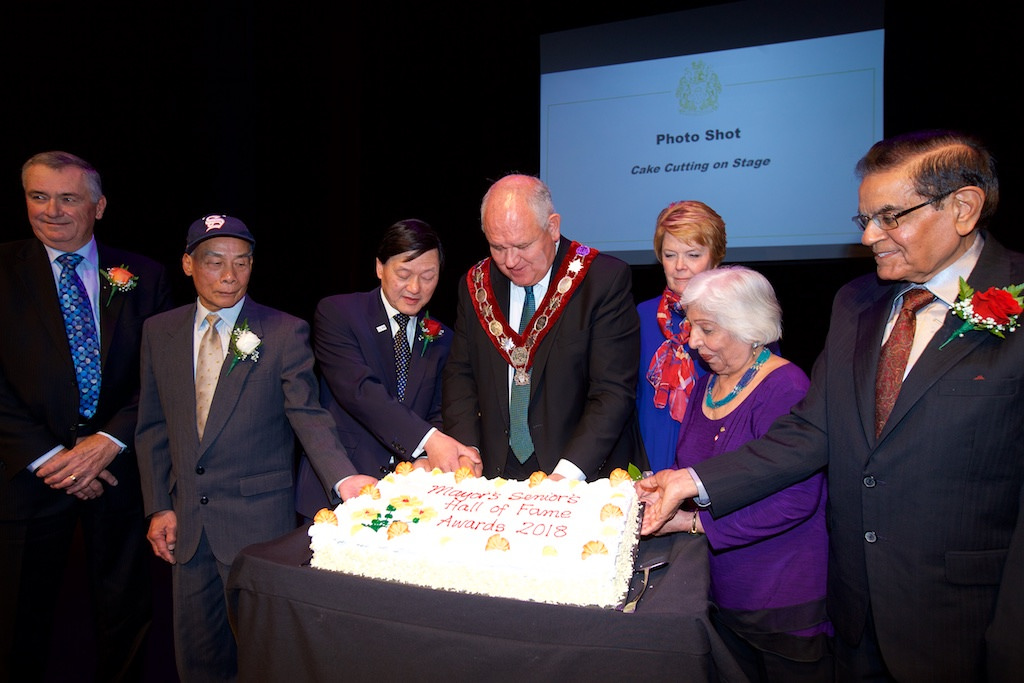 The 19th Annual Mayor's Seniors Hall of Fame Awards were celebrated at the Markham Civic Centre at a very special ceremony on October 2, 2017. John Buie received this year's Mayor's Seniors Hall of Fame Award for his service and volunteering throughout the city. Ross Bowser and Rob Hyland received Meritorious Awards, and Certificate of Appreciation were presented to Vijay Ghai, Lorna Rogers and Helen Walter.

Khalid Usman received this year's Mayor's Seniors Hall of Fame Award for his service and leadership in his community. Khalid has been an active member of Markham's Race Relations Committee for years. He was the driving force behind the "Many Faces of Markham" project that promotes mutual respect and rapport between communities. He has also served as the Chairman of York Region's Peace Tree initiative. Khalid has also made significant contributions to the international community. He was one of the founding directors of the Canadian Federation of Intercultural friendship (CFIF). 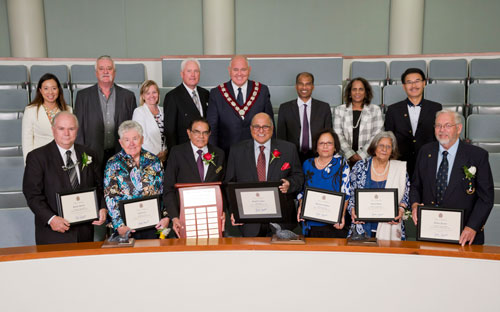 John Webster received the 2015 Hall of Fame Award. Following in the footsteps of his ancestors, John has been active in many charitable and not-for-profit causes in Markham. As the Official Town Crier, John represents the City in competitions around the world. A member of the Optimist Club of Markham, John has volunteered with many community organizations and events over the years. He is also a chartered member of the renowned Markham Concert Band. He also chaired both the Golden and Diamond Jubilee Committees.

Anne Nicholson and Ardy Reid received Meritorious Awards. Certificates of Appreciation were given to to Javid Khan, Al Wallis, and Dorothy Reesor.

View photos from the flag raising, award ceremony and reception. 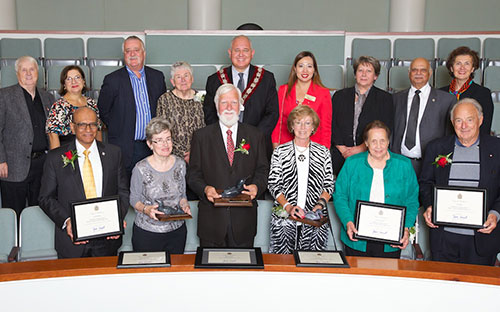 Betty Bell received this year’s Mayor's Seniors Hall of Fame Award for her tireless work in the community. Betty devoted hours to raising funds for the Breast Health Centre at Markham-Stouffville Hospital and the Canadian Breast Cancer Foundation. She has also been an active volunteer with the Celebration of Hope, the Raffle of Hope, the Culinary Classic Golf Tournament and many other charitable community events. In addition, Betty received the Queen’s Diamond Jubilee Medal Award in 2012.

The Meritorious Award recipients were Robert Stiver and Mary Lou Busato. Certificates of Appreciation were given to Jean-Anne Dodge, Ashok Joshi, Carol Smith, and Elaine Wilton. 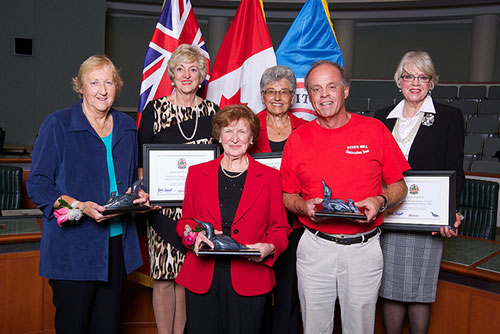 This year’s recipient was Peter Mason. Carol Wong and Angela Morris received the Meritorious Award. Certificates of Appreciation are given to Barbara Taverner, Bruce Brown, and Louise Mills. 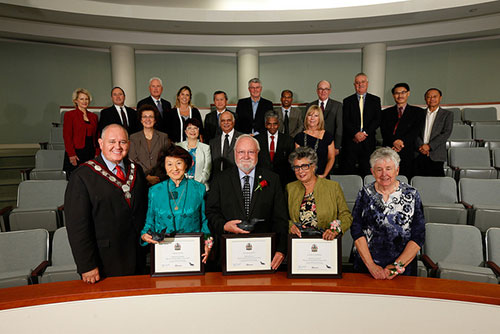