The City of Markham started the reconstruction of Main Street Markham from Highway 7 to Bullock Drive in the summer of 2012. This began with the installation of the underground servicing (watermain, storm sewers, and associated service connections) and was completed in the fall of 2012. The remaining roadworks and streetscaping is scheduled to begin July 2013 and is expected to be completed by November 2013.

Numerous public meetings were held during the design and construction phases to ensure that the public has had an opportunity to provide input on the direction of the project.

Access to businesses and residences will be maintained during construction at all times, with the exception of when accesses need to be reconstructed. The City has received input from the public, agencies, and stakeholders through PLC meetings and Open Houses. Using past experience and public input, a Traffic Management Plan (TMP) was designed for each section of Main Street being reconstructed.

The TMP design principles include, but are not limited to:

The preferred TMP, will be selected based on past experience and public input and will allow for construction completion in a timely and cost effective fashion.

Sharrow markings located on many local streets are an indicator to both cyclists and motorists that the roadway is to be shared. In these instances normal rules of the road apply and cyclists are required to stay to the side to allow motorists to pass safely.

Markham’s Cycling Master Plan identified Markham Road as a candidate for sharrow markings. Many other Markham streets are “signed” on the boulevard to indicate a road to be shared between motorist and cyclists. Main Street Markham is one of the first to use sharrow markings in Markham.

Sharrow markings, and the shared road concept, is generally used when dedicated bike lanes or other cycling facilities are not possible when there is limited right of way allowance or where there may be a conflict with other uses such as street parking. Although dedicated bike lanes are preferred, shared bike lanes are recognized and approved by Markham’s Cycling and Pedestrian Advisory Committee (CPAC) and Markham Council. 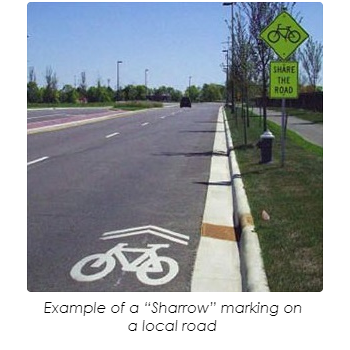