This phase of reconstruction will include widening the road, and providing improvements and upgrades to existing sewers and water mains. The bridge over the Rouge River will also be removed and reconstructed.

The bridge, which was originally built in 1946 and underwent a major rehabilitation in 1981, now must be replaced. The majority of the bridge reconstruction is expected to be completed by December 31, 2014, so the roadway can be re-opened to through traffic.

The new road will have three lanes – two southbound and one northbound. There will also be a multi-use pathway on the east side of the road. Heritage-style streetscape features, including decorative streetlights and stone textured walls, have been included in the overall plan to tie into the new Main Street Markham North.

We are doing everything possible to minimize the impact of this road closure on local residents and appreciate the patience and understanding of all those affected.

August 14, 2015
The road is now fully open with two lanes southbound and one lane northbound.

Did the City consider implementing reversible lanes on Main Street Markham south?
Reversible lanes (lanes designated for traffic movement one-way during part of the day and in the opposite direction during another part of the day) were investigated during the Environmental Assessment Phase and were not endorsed by stakeholders or the City.

Markham staff will monitor traffic volumes once construction is completed and if it is determined that congestion is an ongoing issue, implementation of reversible lanes will be considered.

Week of December 2, 2014
The project is on schedule and the road is expected to re-open to traffic by December 31, 2014. Crews continue to work on the underside of the bridge as well as to complete concrete form work. Paving of the road has begun. Surface work including landscaping will be completed in 2015. Week of November 24, 2014
The project remains on schedule and is not yet ready for vehicle or pedestrian traffic. Crews are working on the underside of the bridge and completing concrete form work.

Week of October 23, 2014
The bridge is now taking form. All girders have been installed and work has begun on installing the bridge deck. The majority of the underground services have been installed - watermains, storm sewers, and sanitary sewers. Curb installation has begun on the roadway south of the bridge. Weather permitting, traffic signals at James Scott and lighting will be installed over the next month in preparation for our winter shutdown.

Week of August 25, 2014
The majority of the work to remove the old structures has been completed and the new bridge is under construction. Abutments and footings have already been installed. Crews are also in the process of installing the underground facilities (storm sewers, sanitary sewers, and watermains).

All of the asphalt and concrete have now been removed from the roadway.

Environmental protection measures have been put in place and crews are now preparing for the demolition and removal of the centre span of the bridge. Removal will be the main focus of the work for the next month. 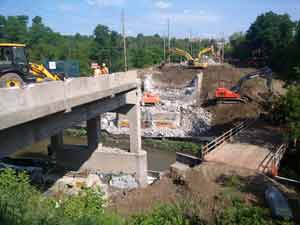 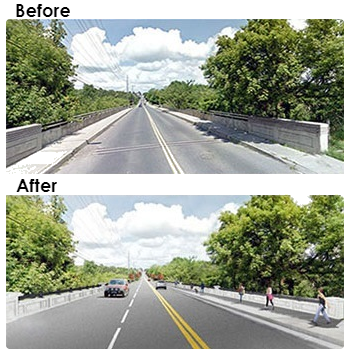