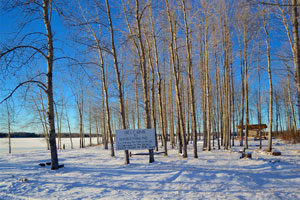 On January 31, 2017 the City of Markham signed a historic agreement of Cultural Collaboration with Eabametoong First Nation, also known as Fort Hope.

Eabametoong is an Ojibway First Nation located 360 kilometres north of Thunder Bay, Ontario on the northern shore of Eabamet Lake. The community is located approximately 1,000 kilometres north of Markham and the total population of Eabametoong totals over 2,500, of which approximately 1,500 live on-reserve. The community is accessible by air and winter road.

Through the agreement Markham and Eabametoong have agreed to: 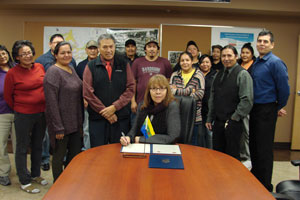 This year, students from Eabametoong’s John C. Yesno Education Centre participated in an art project, challenging students to create an art piece depicting the future of their community in ten years. In April, the student’s artwork will be displayed at the Markham Civic Centre with a small group of Eabametoong students participating in a three day visit to Markham.

The City’s signature Canada 150 celebration, featuring local performances, vendors and activities that explore on our past, present and future.

Aaniin Community Centre and Library is a new community centre currently under construction in southeast Markham at Middlefield Road and 14th Avenue. It is a 122,000 square-foot, fully accessible LEED Gold facility located on more than 13 acres of land. The name “Aaniin,” pronounced [ah-nee], means “hello” in Ojibway and was chosen to welcome Markham’s many diverse communities, to celebrate Canada’s 150th anniversary of Confederation in 2017 and in honour of our First Nation’s people. It is scheduled to open in 2017.

Want the latest news delivered right to your inbox?

Stay up-to date with news about Markham’s Eabametoong Partnership and other related initiatives by signing up for eNews.