The City of Markham distributed a Notice called the ‘Safety Awareness Program and Implementation of Anti-Whistling’ Notice to all directly affected area residents and business owners by paper copy. Schools, Places of Worship, Community Centres, York Region, Police Services and Emergency Medical Services within Markham have also received a copy of this Notice, which can be found in the following link:

The City of Markham is working with Metrolinx and has agreed to phase the implementation of anti-whistling program at the thirteen (13) at-grade locations shown in the map and color coded accordingly. This implementation of anti-whistling will be phased over a period of time until completion of all thirteen (13) locations. During this time, trains will sound the whistle at some of the crossings listed and not others.

The phased implementation of the Anti-Whistling is shown in the map below. 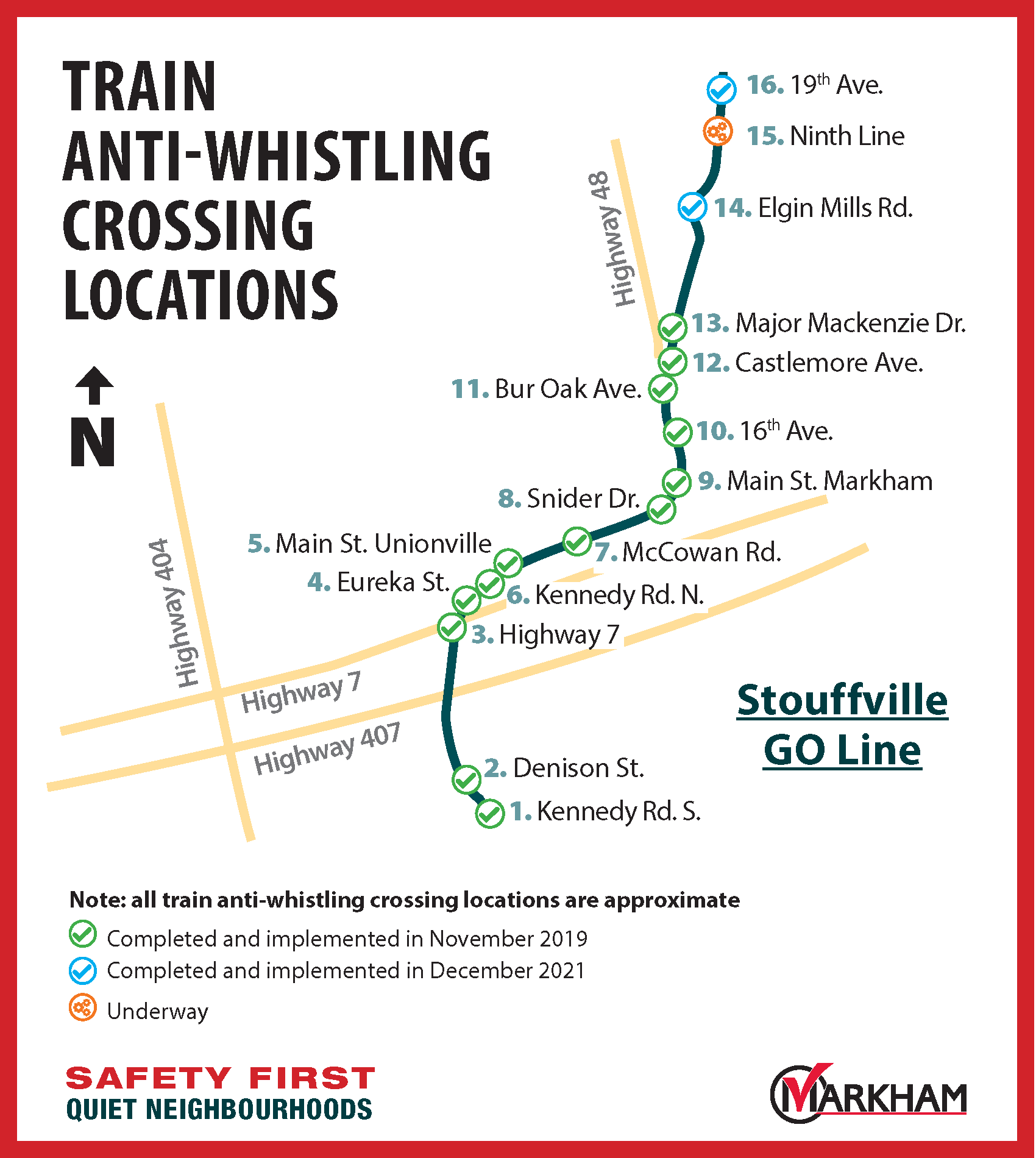 The Safety Awareness stage of the Anti-Whistling program promotes the new features installed at the thirteen (13) at-grade crossings.

In addition to the aforementioned Notice, all the information provided is to inform the public of the changes at the thirteen (13) specific crossings and to be safety conscious of the signs, and visual and audible markers for safety at the rail crossing, in the absence of a train whistle, and cross the tracks in minimal time in a safe and efficient manner.

The thirteen (13) at-grade crossings have been upgraded with either new maze barriers OR pedestrian warning system gates.

Markham is working to complete the remaining phase of the whistle cessation project.

The following three rural crossings are the last remaining locations in the project, which are currently in the final design stage:

The steps required to complete the work at these locations include:

Markham and York Region have been working closely with Metrolinx to implement whistle cessation at the public at-grade train crossings along the Stouffville GO Line. Whistle Cessation has now been implemented at the following locations:

Bur Oak Avenue and McCowan Road Crossing works are now complete, and Markham and York Region are working with Metrolinx to address the remaining deficiency in order to implement whistle cessation at these locations.

Contractor has completed the following at Bur Oak Avenue crossing:

Due to the holidays, no work was undertaken in the last 2 weeks.

Contractor has completed the following at Bur Oak Avenue crossing: