Many Faces of Markham

Presented by the City of Markham Race Relations Committee.

Many Faces of Markham is an annual initiative in support of the United Nation’s International Day for the Elimination of Racial Discrimination, which takes place every year on March 21.

Many Faces of Markham originally launched in 1999 and to this day, it continues to support the City’s longstanding commitment to the values of diversity, inclusion and social cohesion. We are stronger together.

Every year, the City of Markham Race Relations Committee selects a theme in support of diversity, inclusion and the elimination of racism. The annual initiative typically involves an art contest where Markham youth submit art in support of the year’s theme.

This year’s Many Faces of Markham contest theme was Working Together to Confront Anti-Black Racism. There were four contest categories, which included: writing, video, artwork and spoken word. The contest was open to students who live in Markham, in grades Kindergarten to Grade 12.

Although this year’s theme focused on Anti-Black Racism, the City of Markham stands against all forms of racism, stereotyping, prejudice and discrimination. This includes, but is not limited to, anti-Black, anti-Asian and anti-Indigenous racism, Islamophobia and anti-Semitism, amongst other forms of racism. We also stand against discrimination based on, gender identity and expression, age, sexual orientation, religious affiliation and ability, and all other grounds referenced in the Human Rights Code.

The City supports a variety of measures to inform our communities, have respectful conversations and to break down barriers. The City’s values and commitment to diversity can be seen in our Inclusion Charter and Markham’s Diversity Action Plan that is currently being updated. Learn more about our inclusion, equity, anti-racism, diversity and accessibility efforts.

The contest is now over. Congratulations to our winners! 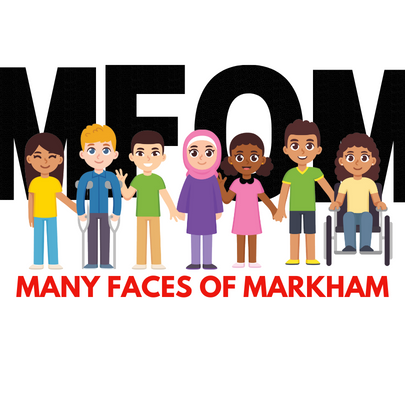 We’d like to thank all of the talented Markham students from Kindergarten through to grade 12 for taking the time to put together such high-caliber and well-thought out submissions.

The contest received a total of 264 submissions!

View the 2021 Many Faces of Markham contest winners [PDF]

2021 Many Faces of Markham Winners

View Past Many Faces of Markham Themes