Markham is extremely honoured to be the first recipient of the Prince of Wales Prize.

Announced in 1999 under the patronage of His Royal Highness, The Prince of Wales, the prize is awarded by the Heritage Canada Foundation to a deserving local government, large or small, urban or rural which has demonstrated exemplary commitment to the preservation of the built heritage within its boundaries.

In 1999, Town officials received the award in Calgary Alberta. In 2000, Town officials were invited to a reception in the Governor General’s residence in Ottawa to meet His Royal Highness, the Prince Charles and to be formally recognized. 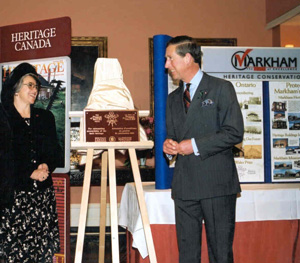 For more information about the Prince of Wales Prize please visit the Heritage Canada website at www.heritagecanada.org.