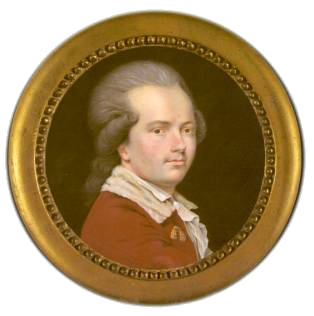 The modern history of the Town of Markham began in 1791 when John Graves Simcoe was appointed the first Lieutenant-Governor of Upper Canada. During his term as Lieutenant Governor, Simcoe's actions impacted directly on Markham. His concern for improving the military security of the new territory led to the clearing of Yonge Street and a system of free land grants, both of which greatly influenced the establishment and growth of what became the Township of Markham. Simcoe was also responsible for giving the Township its name, after his friend, William Markham, the Archbishop of York at the time.

The first European settlement in Markham occurred when William Moll Berczy, a German artist and developer led a group of approximately sixty-four German families to North America. Arriving in Philadelphia in 1792, they had originally intended to settle on land in the Genessee area of New York State.

On their arrival in New York, however, disputes arose over finances and land tenure and the Berczy Settlers were forced to look elsewhere. In May of 1794, Berczy negotiated with Simcoe for 64,000 acres in Markham Township, soon to be known as the German Company Lands. The Berczy settlers, joined by several Pennsylvania German families, set out for Upper Canada. Sixty-four families arrived that year and their first few years proved difficult, as a result of harsh winters and crop failures. A number of original settlers moved back to Niagara, but those who stayed managed to prosper eventually. 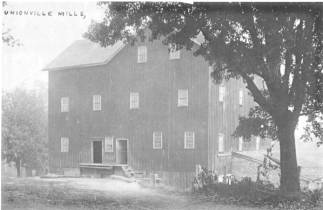 Other groups soon arrived, including French Revolutionary Émigrés, United Empire Loyalists, Pennsylvania Germans and migrants from the British Isles, all looking for a better way of life.

Markham's early years (1794 to 1830) were characterised by the rigors of homesteading and the development of agricultural industries. The township's many rivers and streams soon supported water-powered saw, grist and woollen mills. Small hamlets such as German Mills, Almira, Buttonville, Cedar Grove and Unionville began to spring up at the mill sites.

The people of Markham were always politically active, and with the heated tensions between reformers and the family compact, leading up to the MacKenzie Rebellion of 1837, Markham found itself bitterly divided. Markham, as part of the riding of York, elected the rebel leader William Lyon MacKenzie as their member of the Legislative Assembly on five occasions between 1828 and 1836. He did not sit for long, however, as each time he entered the house, he was expelled for his republican views.

As a result of this and other issues, some Markham farmers risked arrest by openly supporting the rebellion of 1837 while others under Captain John button raised armed troops of militia to quash the violence.

With improved transportation routes such as Yonge Street and the growing population, urbanisation increase. By 1857, most of the township had been cleared of timber and the land was under cultivation. Villages like Thornhill, Unionville and Markham greatly expanded and new, specialised industries such as wagon works, tanneries, farm implement manufacturers and furniture factories sprang up. 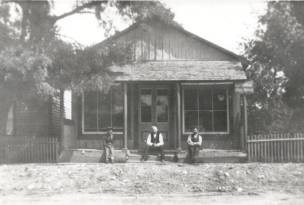 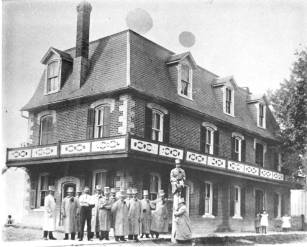 The development of railways in neighbouring townships soon threatened the prosperity of Markham, so local business owners began to lobby for a railway. On September 14, 1871, the Toronto and Nipissing Railway Company, with stations in Unionville and Markham, officially opened its Scarborough-Uxbridge line. 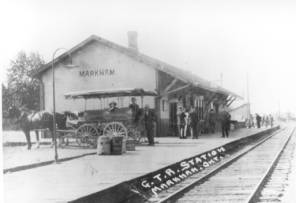 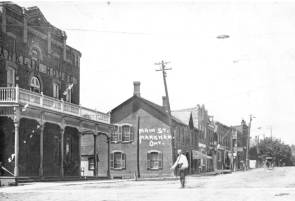 As first, the railway brought renewed prosperity and rapid development. The Village of Markham incorporated in 1873, grew to a population of 1,100 by 1891.

Increased communication with Toronto, however, brought about by the rail line and enhanced by the telegraph, telephone and automobile eventually diminished the industrial role of the villages in the Township of Markham after the turn of the century.

Local industries were simply unable to compete with the larger suppliers in the city. As a result, Markham, once hailed as the Birmingham of Canada, returned to being a quietly productive agricultural community.

After World War II, Markham began to feel the effects of urban encroachment from Toronto. Heavily industrialised by the war effort and experiencing a post-war baby boom unlike any other in history, the township became a magnet for waves of new immigrants from all over the world. In 1971, The Regional Municipality of York was established by the Province of Ontario and a large portion of the was incorporated into the Town of Markham.

The opening of Highway 404 in the mid-1970s further accelerated the urban development of the town. Amidst all this former Markham Township rapid change and growth, however, many reminders of Markham's rural roots have managed to endure. 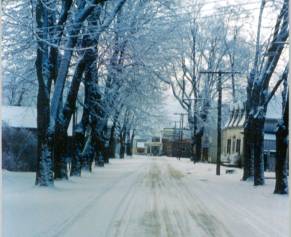