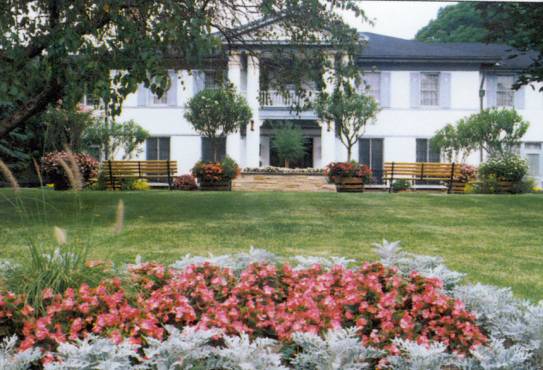 The Gardens of Heinzman House, 1998

Originally a residential estate home, Heintzman House or Sunnyside Manor Farm was built for Anthony Hillingshead in 1802. The property was owned by Samuel Francis in the late 19th and early 20th Centuries, before being sold to Charles T. Heintzman in 1929.

Preserved in the new residential community of North Thornhill and owned by the City of Markham, Heintzman House is now a community meeting hall and conference centre. The house is home to many wedding parties throughout the year and to the annual Thornhill-Village Festival period costume ball.

In 1983, Heintzman House was designated as a heritage site under the Ontario Heritage Act. Built c. 1850, and clad in board and batten, with its distinctive tassel droop verge-boards, the Salem Eckardt House is an architectural highlight of the village of Unionville. From 1957 until 1978 the house was owned by Kathleen McKay, a descendant of local pioneer families.

For several years in the 1950s and 60s, Group of Seven Artist, Frederick Horsman Varley was a house guest of McKays, and it was from a studio in the house that he produced some of his last works. In view of the historical and architectural significance of the house, the City of Markham purchased the home which it operates to this day as a community arts centre and gallery. The German Mills School, S.S. #2, built in 1874 is named for first mill site in Markham Township. The mill was established in the vicinity in the late 1790s by Markham founder William Moll Berczy. This attractive one room school house served the area to the east of Thornhill for almost 90 years until it was closed due to overcrowding in 1962. Initially used as a school office, the building was acquired by the City of Markham, where it serves today as a community centre and day care facility. Built in 1869, the Cedar Grove Schoolhouse replaced an earlier log schoolhouse built on the site by John Eby Reesor. The building served both as a school and a church for Mennonites as well as Presbyterians.

For almost 100 years, the school served the educational needs of the rural community of Cedar Grove before closing as a result of educational reforms in 1966. Recognising the importance of the building to the community, the then Township of Markham immediately purchased the building for use as a community centre, a function it continues to serve today.

This municipally owned heritage structure was designated as a heritage building in 1979. The Box Grove Schoolhouse, S.S. #18, was built in the 1870s to serve the educational needs of the small hamlet of Box Grove (formerly Sparta), located on the Ninth Line, adjacent to a tributary of the Rouge River.

As with other Markham Township Schools, the schoolhouse at Box Grove was a focal point of life in the community. As a result, when educational restructuring forced the closure of one room schoolhouses in the 1960s. The Box Grove Schoolhouse was acquired by Markham for use as a community centre. The clapboard clad Thornhill Village Library was built in 1845 as a home for Ellen Frizzell Lazier, on Colborne Street, Thornhill. Over the years the building was occupied by the Ramsden, McDonald and Grice families, the latter of whom operated a grocery store from the building.

In 1960, the building was acquired by the then Village of Thornhill for use as a public library. The City of Markham continues to operate this village landmark as a library to this day as part of its public library system.

The library sign was designed by Thoreau MacDonald, son of the Group of Seven artist J.E.H. MacDonald and a renowned artist in his own right. 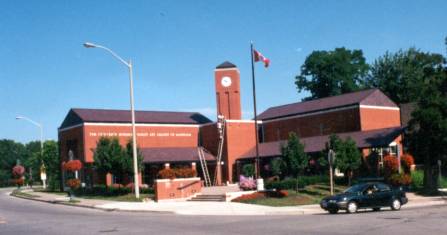 Although a relatively new building, the Frederick Horsman Varley Art Gallery of Markham is a custodian of a significant part of Canada’s artistic heritage with one of the largest permanent collections of paintings by Group of Seven member Frederick Horsman Varley. The paintings were generously donated to the City of Markham by the late Kathleen Gormley McKay, who took Varley into her home during the last decade of his life.

The gallery was built by the City of Markham specifically to house the McKay collection of Varley paintings. Works by a number of renowned contemporaries of Varley are also part of the Gallery’s collection, including J.E.H. MacDonald, J.W. Morrice and David Milne.

The building is located in the Unionville Heritage District and is designed to complement the character of the area, while maintaining its modernity.