The artists created a panorama that has been broken into 21 panels. As the panels move from the centre out, the images become increasingly abstract. The left section of the mural emphasizes the importance of horizontal lines in the composition, while the right section focuses on the vertical elements of the design.

The sun at the centre of the composition is represented by concentric circles that mimic the rings of a tree. Inspired by the natural surroundings of the neighbourhood, the artists chose to use pine and birch trees, which are both native to South Central Ontario and grow in the Markham-Thornhill area. The silhouette of the Canada goose, a Canadian icon, is also included.

As our neighbourhoods grow, our environment becomes increasingly urbanized. This mural reminds us of the importance and presence of nature in our daily lives.

The mural is located on Henderson Ave, under the CN rail bridge 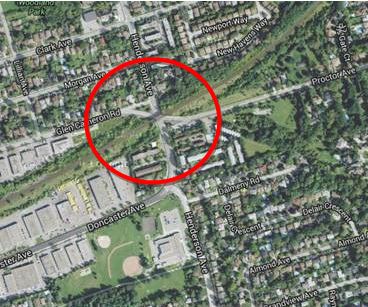 Having received a BFA from Queen's University and an MFA from the University of Victoria, she lives and works in Markham. Her work is represented by Nicholas Metivier Gallery in Toronto. 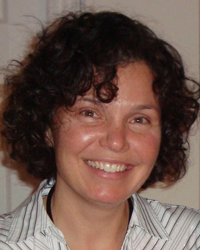 Andrea End’s inspiration is the sunlight - its colours and shapes that are created in the forests and on the lakes of the Canadian scenery. Her practice is informed by her photographic documentation of the countryside.  Andrea attended the Ontario College of Art until 1984. After a decade of painting and exhibiting, she raised her family, and afterward, she returned to her brushes with renewed enthusiasm. Andrea is on the Board/Executive Council of the Richmond Hill Group of Artists. She is an artist representative on the Cultural Leadership Council, an advisory committee for Richmond Hill’s Cultural Plan.

Andrea’s paintings are on display at Pleasant Run Golf Course in Sharon, Ontario. This solo show will run until the end of July 2013. Andrea End is a long time resident of Richmond Hill, Ontario, where she lives with her husband and children.

Robin Hesse lives and works in Richmond Hill, Ontario. Her subject is the night sky, which she renders with the use of a telescope in dark sky designated areas throughout Canada. Her meticulous, often tiny drawings are romantic in spirit, and rendered in graphite or charcoal, on acid free Arches paper or mylar.

Robin Hesse graduated from the department of Fine Arts at The Ontario College of Art and Design in 1983 with Honors and three major scholarships - The George A. Reid Scholarship, The Dorothy Stevens Scholarship and the W. O. Forsythe Woman Painter’s Graduate Scholarship. Robin then attended the University of Guelph to obtain a B.F.A.

In Ontario, she has had exhibitions at many public and private art galleries, including The Art Gallery of Peel, Grimsby Public Art Gallery, Burlington Arts Centre and The Glenhyrst Art Gallery of Brant. Robin has exhibited several times at BIAM (Biennale international d’art miniature) in Ville-Marie, Quebec. Exhibitions in the U.S.A. include Impact Gallery in Buffalo, N.Y, The University of Rochester and Florida State University.

Robin was elected to the Canadian Society of Painters in Watercolor in 1994 and to the Ontario Society of Artists in 1997. Robin received numerous grants from the Ontario Arts Council, including an OAC Emerging Artists Grant. She is represented by Davis Canadian Arts, Stratford, and Circle Arts Gallery in Tobermory. She is also a member of Propeller Centre for the Visual Arts, an artist-run gallery in Toronto.

Robin’s ‘13’ project was featured in 2013 Nuit Blanche as part of the interactive night-long performances.

Matthew Moloney was born in Toronto, and has spent his entire life living, learning, and working in Ontario. He is an emerging artist with a focus on drawing and painting. Matthew strives to create art that expresses the qualities and patterns inherent to the medium and surfaces used in his work. His inspiration comes from the realm of pure abstraction, and he explores many established styles such as colour field painting, expressionism and graffiti.

Graduating from OCADu in 2012 with a degree in Drawing and Painting and a minor in Integrated Media, he often uses technology to assist him in his artwork, whether through maquette paintings in Photoshop or video installations. He participated in the OCADu thesis program, and showed in the 2011 Grad show, “The Show Off”, as well as student curated shows in The Great Hall on campus. While he considers himself a painter first, he experiments in many medium and forms.

His current body of work contends with the concept of physicality as it relates to the construction of a painting, from the measurement and fabrication of the panel itself to the paint and its applications. The paintings reflect the innate qualities of its support -a braced wood panel, wherein the grain of wood is left as an integral element to each composition, paying tribute to the object itself, and to the tree. 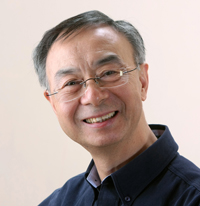 Glen Ou is an accomplished photographer and artist who immigrated to Canada in 1987. Glen studied Fine Arts and Stage Design at the Shanghai Theatre Academy from 1962 to 1972. From 1974-1986, his expressionist oil paintings were exhibited annually at the Shanghai Art Museum. In September 2011, he was invited to exhibit at the 15th Shanghai Art Expo and at the Forum of Global Chinese Collectors.

Glen’s rich cultural background and experience have complimented his teaching endeavors. In Toronto, from 1987-1989, he taught art at The Great Wall Art Gallery, he was a juror the CPAC Children’s Drawing Contest, and in China, he was invited to lecture at the Shanghai Oriental Art Center.

In 2001, Glen had a solo exhibition at the Taipei Culture Centre in Toronto. He participated in group shows at the McKay Art Gallery in Unionville, in the East Asian Artists Foundation Group Exhibition, at the Bank of China in Toronto, and in York Region, and at the Mill Pond Art Gallery of Richmond Hill. Glen is a member of the Richmond Hill Group of Artists, the “Painters6” group, the East Asian Artists Foundation Group and the Canada Contemporary Art Alliance.

Susan Weisz expresses herself through acrylic painting and mixed media. Strong, colourful, geometric abstracts dominate in some of her latest paintings, while other works are more free-flowing in nature. Blending self-taught techniques with ones learned through courses and workshops, Susan continues to develop her own personal style.

Susan is a member of the Markham Group of Artists and the York Region Arts Council.

Susan’s work has been on display at the Mill Pond Gallery, Markham Theatre, Koffler Centre of the Arts, the Region of York’s Chairman Dinner for the Arts, Markham Civic Centre - Mayor’s Art Showcase, Metro Hall, McKay Art Centre, Art Square Gallery, and the Richmond Hill Centre for the Performing Arts where her work was featured in a solo show. Susan participated in the Richmond Hill Studio Tour and Art Sale in 2011 and 2012. She was awarded with a Juror’s Choice award and an Honourable Mention award at the Markham Group of Artists Juried Art Shows - Fall 2012 and Spring 2013, respectively.

Susan’s paintings are part of private collections in North America and Europe.