An Official Plan sets out land use policies. These policies guide future development and manage growth. The Plan lays the foundation for building a good community. It provides a vision of the City. It shows how we can make that vision real. And it shows us how to track our progress and change it. All development in Markham has to match the City's approved Official Plan.

There are also many Secondary Plans. These give more specific directions on using land within Markham. Whenever someone proposes a new development, the City looks at the Official Plan. The new development has to match the Plan’s guidelines.

Council adopted the 2014 Official Plan on December 10, 2013. York Region approved it on June 12, 2014. The City has appealed this new Official Plan to the Ontario Municipal Board. This means that the Plan is not fully in force. On November 24, 2017 the Ontario Municipal Board issued a Partial Approval Order, which was updated on April 9, 2018 by the Local Planning Appeal Tribunal, bringing parts of the Plan in force. Until a Tribunal decision to approve all or part of the new Official Plan, we must use the 1987 Official Plan. 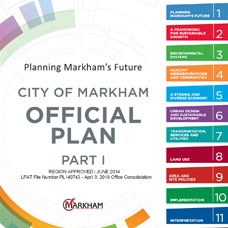