The City of Markham 1987 Official Plan remains in force for certain land use designations and policies that are still under appeal under the 2014 Official Plan, and for certain areas in the city that require more detailed planning in the form of secondary plans.

An office consolidation of the Markham 2014 Official Plan incorporating the Partial Approval Orders issued by the Ontario Land Tribunal is available through the links below. An Effective Date Table identifies the in-force date that each policy, map or appendix was approved by Order of the Ontario Land Tribunal. Certain portions of the text, maps and appendices remain subject to appeals to the Tribunal as referenced by a green box or text. The modifications and deferrals referenced in this consolidation should be referenced in conjunction with the York Re gion Notice of Decision dated June 17, 2014, the November 24, 2017 Partial Approval Order issued by the Tribunal as well as the Tribunal's April 9, 2018 Update to the Order.

Click on the colored tabs to view the document (April 9, 2018 Official Consolidation). 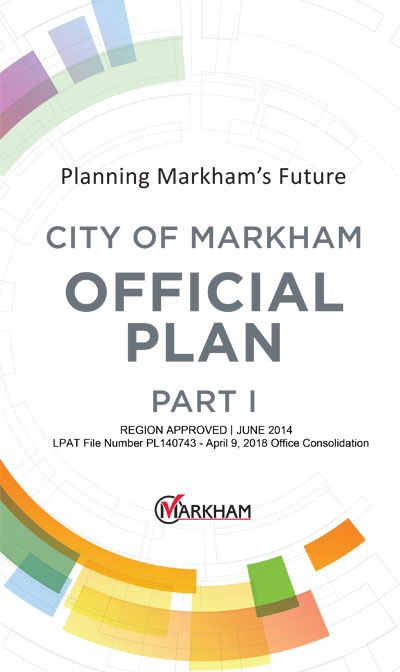 Where can I get a copy of the new Official Plan?

The 2014 Official Plan is available online, or you can view a paper copy at the Clerk's Department, Markham Civic Centre, 101 Town Centre Boulevard, Main Floor) from Monday to Friday between 8:30 AM and 4:30 PM. Copies are also available for viewing at Markham's public libraries.