MARKHAM, ON, April 12, 2016 — The City of Markham was officially declared as the first Canadian municipality to become a "Monarch-Friendly City". A special proclamation was unanimously passed by Markham’s City Council earlier this week to raise awareness about the decline of the monarch butterfly and the species’ need for habitat.

"Markham is proud to be a municipal leader undertaking this important initiative to support pollinator populations including monarch butterflies and bees," said Mayor Frank Scarpitti. "Three quarters of the food we eat depends on pollinators like monarch butterflies. The City of Markham has an important role to play in educating the public and supporting monarch habitats in our city parks, community gardens, natural spaces, municipal facilities and public lands."

The City of Markham’s monarch initiative is supported by Markham City Council, which endorsed a series of actions including: launching a public outreach campaign; collaborating with local gardening and conservation groups; additional butterfly-friendly plantings on city properties; creation of the world’s first municipal milkweed nursery; and encouraging residents to sign the David Suzuki Foundation’s Monarch Manifesto.

"The City of Markham is setting an inspiring example for municipalities throughout the migratory range of the monarch butterfly," said Jode Roberts, manager of the David Suzuki Foundation’s #gotmilkweed and Monarch Manifesto campaigns. "While this effort is aimed at helping monarchs, it will also support hundreds of other essential local pollinators – like wild bees, honeybees and butterflies – that call Markham home."

Council also directed staff to develop a City of Markham Bee Strategy to protect bees, and include exploring a Bee Proclamation and evaluate opportunities for honeybee hives within the City of Markham.

"This week’s proclamation is another example of how we strive to protect and enhance the City of Markham’s natural features and green spaces to bring us closer to our goal of building a sustainable community," said Chair of Markham’s Environmental and Sustainability Committee, Valerie Burke, Ward 1 Councillor.

While the number of monarch butterflies overwintering in Mexico was 3.5 times higher this winter than last, populations have declined by more than 80 per cent over the past two decades. Underscoring the perils facing monarchs, a single snowstorm in early March killed up to 11 million monarchs before they left for their multigenerational journey back to Canada. A new study estimates the population has up to a 57 per cent chance of reaching “quasi-extinction” levels over the next 20 years.

This week, the David Suzuki Foundation launched its third annual #gotmilkweed campaign that encourages Canadians to plant milkweed in their yards, parks and schoolyards. The campaign has inspired more than 10,000 milkweed plantings in Toronto, with another 11,000 people across the country pledging to help monarchs via the Monarch Manifesto. All proceeds from #gotmilkweed support the David Suzuki Foundation’s efforts to conserve monarchs and other pollinators through research, advocacy and innovative initiatives like the Homegrown National Park Project. 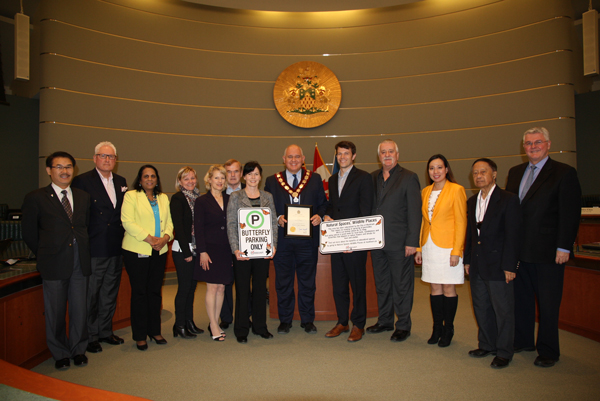